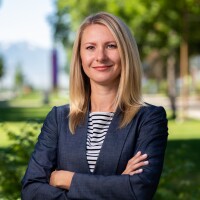 Selected Publications
"Increasing Workplace Diversity: Evidence from a Recruiting Experiment at a Fourtune-500 Company​" (with Jeffrey Flory, Andreas Leibbrandt, and Christina Rhott). Forthcoming at the Journal of Human Resources.

"Effort, Luck, and Voting for Redistribution​​" (with Lars Lefgren and David Sims). Journal of Public Economics, 143. 2016.

"Does the Message Matter? A Field Experiment on Political Party Recruitment" (with Jessica Preece). Journal of Experimental Political Science, 2:1-10, 2015.

"The other 1%: class leavening, contamination and voting for redistribution" NBER Working Paper 24617. (with Lars Lefgren and David Sims)

I am an Assistant Professor of Economics at Brigham Young University and a Research Affiliate with the Science of Diversity and Inclusion Initiative. My fields are behavioral, labor, and public economics. ​